Why the MCU Should’ve Stopped after Endgame 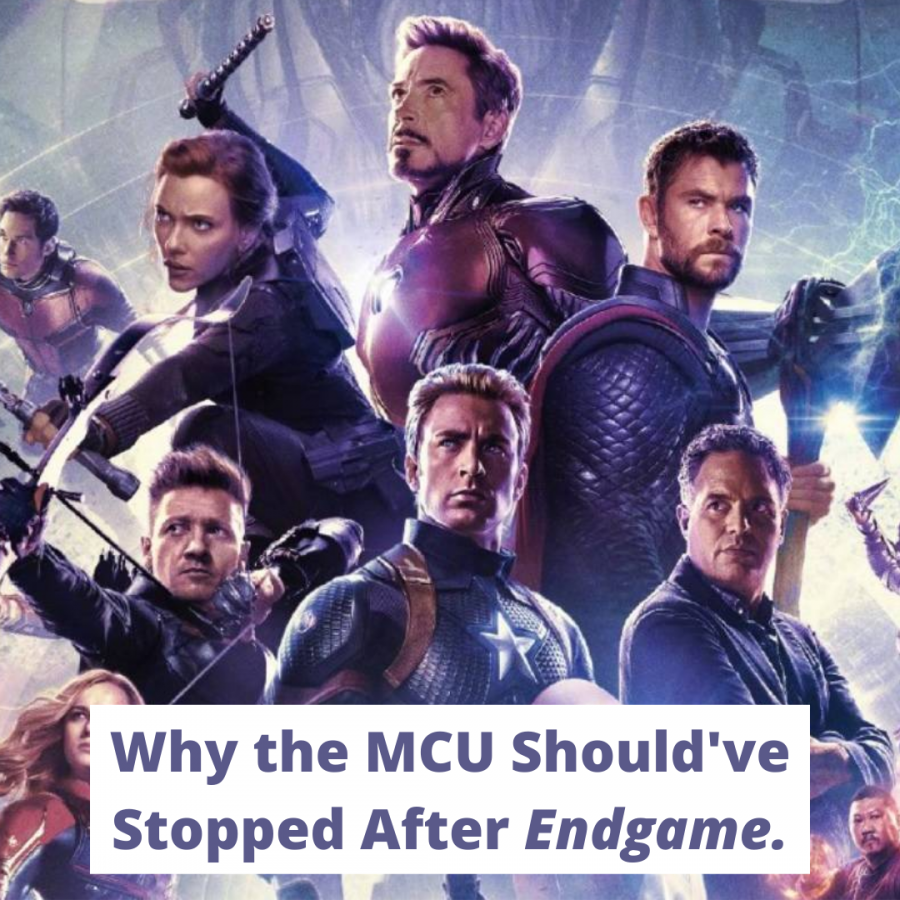 The Marvel Cinematic Universe (or MCU for short), a collection of movies based off of Stan Lee’s comic book superheroes, has taken the world by storm. The series’ most successful movie, Avengers: Endgame, grossed $2.503 billion worldwide. The MCU’s first installment was 2008’s Iron Man, and it starred Robert Downey Jr. as the title character.

Downey has since appeared in eight other MCU films, alongside A-listers like Chris Evans, Scarlett Johansson, Chadwick Boseman and countless others. Because several of Marvel’s most influential actors’ (including Downey’s) contracts expired after the previously-mentioned Avengers: Endgame, many fans considered the film to be the perfect epilogue to a beloved 22-movie franchise.

But, even without a considerable number of the MCU’s original characters, Marvel and Disney executives are continuing to put out content in the form of TV shows on Disney+. While some fans are embracing Phase 4 (the technical name for the post-Endgame MCU), the TV shows have been subject to lots of criticisms.

WandaVision, the first Disney+ show to be released, is the best of the three. The series creatively explores Wanda Maximoff’s, played by Elizabeth Olsen, grief after the events of Avengers: Infinity War, in which she is forced to kill her boyfriend, Vision. The “mysterious sitcom” set-up is incredibly entertaining, but WandaVision suffers from some pacing problems, and it’s final episode drags the whole show down.

The Falcon and the Winter Soldier features two of the MCU’s best side characters, Bucky Barnes and Sam Wilson. Its first two episodes are promising, exploring themes set up in previous movies. But it too suffers from pacing issues, and the new characters are incredibly underwhelming.

Besides the addition of Wyatt Russell’s John Walker, a clinically insane anti-Captain America, the show is incredibly boring and anti-climatic. Bucky and Sam’s friendship is also underdeveloped and rushed.

Loki is the worst Disney+ series, hands down. Loki, played by Tom Hiddleston, is a fan-favorite anti-hero in the Marvel movies. His Disney+ series was announced shortly after Avengers: Endgame’s release, and fans were incredibly excited for it. Loki died at the beginning of Endgame, so they spent hours theorizing about how he could’ve faked his death.

But no, Loki didn’t fake his death in Endgame. Instead, the Disney+ series follows a 2012 Loki through a time travel “adventure.” He meets another version of himself (from another timeline), and falls in love with her. It’s awful. The show completely ruins one of the MCU’s best characters.

“The Disney+ spin-off shows are not it. They’re so dumb…They are adding onto Quantum Realm stuff. I hate it,” Vespestad said.

Phase-4 Marvel’s shifting focus from infinity stones to the multiverse. While this could allow for some cool crossovers, like Toby Maguire and Andrew Garfield’s rumored appearance in the highly anticipated Spider-Man: No Way Home, it is ultimately too confusing to incorporate into the MCU.

“I don’t like where the multiverse is going. That’s the new thing [Marvel’s] building up to. I think all the time stuff is confusing and inconsistent. Marvel bends it to their will,” Eckart said.

If Marvel executives approached the MCU from a narrative perspective, these shows wouldn’t exist. Avengers: Endgame is the perfect ending to this franchise for a number of reasons. A considerable number of characters completed their character arcs in Endgame, and continuing their stories feels inauthentic, like in The Falcon and the Winter Soldier.

And maybe this is selfish, but something is missing without so many of the original cast members. Downey, Evans, Johansson- they all started and led the MCU for almost two decades. It feels almost disrespectful to continue without them. It will never be the same.

“They’re doing it for money. Not for the fans,” Vespestad said.

Marvel’s continuing their franchise for one reason, and one reason only: money. Most fans aren’t satisfied with the TV shows, but as long as they bring in a profit, we’ll continue to see more of them on Disney+.

“I thought Endgame was a really good ending to the MCU. It’s what the series was working towards for all of the 20-something movies,” Eckart said. “It was the perfect wrap-up of everything they’ve been working on since Iron Man 1. [The MCU] should’ve stopped after Endgame.”