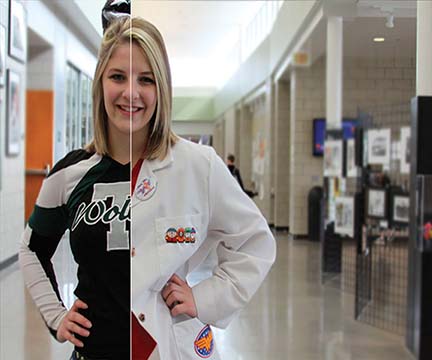 I want to be a lawyer when I grow up; I have since I was six years old. I have also been a cheerleader for as long as I can remember; it is something I have always enjoyed. Since I was young, I have had the cheerleading stereotype attached to me. When I am in my uniform, at first glance, people assume I’m dumb and self-centered. They think I don’t care about school work and that I am more concerned with what I look like and how I am perceived by others. Whenever I get asked what I want to be when I grow up, and I say ‘lawyer,’ I constantly get the same blank stare and half-smile that says, ‘well i hope that works out for you.’ Nobody has ever had full confidence in my dreams. I think nobody believes I’m smart enough because of the bow and the uniform I wear.

It’s hard to face society when you have a stereotype attached to you. When people think of cheerleaders, most of the thoughts that come to mind include unathletic girls with pom-poms who are more concerned with the latest gossip and drama than maintaining all A’s and setting high goals.

“When I think of a cheerleader I tend to think of the movies like ‘Bring it On’.” senior Jordan Alberino said. “I feel like our cheerleaders are much more advanced than the girls on the movies, not only in athleticism but also in intelligence. I have a lot of cheerleaders in my hard classes, and they seem to do just fine.”

According to varsity cheerleaders sophomores Hannah Harrick, Blake Gustafson and senior Megan Miller, most people tend to believe that cheerleaders are blonde, dumb, rude and shallow. They think they aren’t athletic and that what they do is easy. People think cheerleaders are in their own clique and don’t interact with others that aren’t involved in cheerleading.

Miller has broken the stereotype of a typical cheerleader. She will be attending Kansas State University next year to receive her undergraduate degree, and then she will go on to become a pediatric surgeon. She is in Exploring Health Professions, where she shadows doctors and nurses and watches procedures.

“I’ve always wanted to be a doctor for as long as I can remember,” Miller said. “I want to be a pediatric surgeon, because I love the hands-on work on the human body; it’s fascinating. Kids are so resilient, and I love seeing them get better and happier as they get healthier. It’s something I love, and the human body amazes me everyday by the things it’s capable of.”

Miller is very strong in academics, she has all A’s during senior year and throughout her high school career has maintained a 3.75 GPA. She wants to pursue a career in the medical field, but she also wants to be involved in her school and have a normal high school experience, which is why she’s a cheerleader.

“Being a cheerleader and wanting to be a doctor has been hard because people tell me I’m not ‘smart enough’ or I’m ‘too dumb’ to reach my dream,” she said. “Just because I’m a cheerleader doesn’t make me dumb in any way. It’s upsetting to me because I know what I’m capable of and there are a lot of cheerleaders that go on to do big things.”

Having a stereotype attached to you can make it hard to be different and stand out in school settings, and many cheerleaders face the judging stares that come with walking into AP and honors classes and getting stared at like ‘you don’t belong here.’

“Since I shadow doctors and nurses at hospitals, they often ask me about what other activities I’m involved in, so I say I’m a cheerleader,” Miller said. “They automatically go ‘oh, okay’ in that kind of tone that people give you when they think you’re stupid. Then they ask if I’m studying to become a nurse. When I tell them no, I want to be a pediatric surgeon, they say, ‘Oh, well if that doesn’t work out …’ or, ‘Well that’s a long, hard road to go down’ or ‘you should look into nursing it’s a lot easier’ all because I’m a cheerleader, I’m a girl and I’m blonde.”

There are more to people than the stereotypes that are attached to them. Intelligence is not measured by the activity we participate in. We’ve been taught to not judge a book by its cover since we were in elementary school; but it seems like we forget what that expression really means.

“People don’t expect cheerleaders to be smart, but most of us are in harder classes and we still maintain really good grades,” Harrick said. “What activity you participate in has nothing to do with how smart you are. There are lots of cheerleaders like myself who are in honors and AP classes, maintaining a 4.0 GPA and plan on going to prestigious colleges.”

On the first day of school when I walked into newspaper with my cheer uniform on, I could feel eyes on me as the other staffers were judging me. I knew that they were questioning why I chose newspaper. I sat down at my computer and kept to myself. Even though we all shared the same love of journalism, I still felt like I didn’t belong. People restrained from having conversations with me because of my cheerleading background.

Now, a semester later, I finally feel like I belong. I can honestly say I have changed the newspaper staff’s opinion on me and I’ve broken their thoughts of being a stereotypical cheerleader. They know me for who I am not just by the uniform I wear.

“Cheerleaders have one of the worst reputations in high school,” senior varsity captain Deavyn Carey said. “People act as if we are the same people shown in the movies; we’re nothing like that. We’re just like everyone else trying to find our place in this world.”