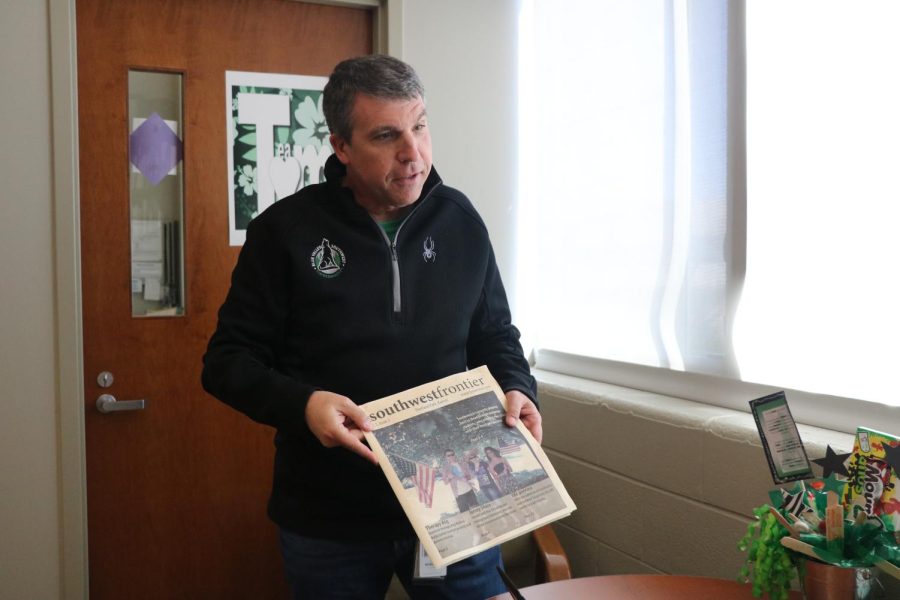 Twelve years after taking the reins of the newly built BV Southwest High School, Scott Roberts has announced his departure. Roberts has accepted a new job at the district office. The job, The Executive Director for School Administration, will be very different from his current position, but Roberts said he’s ready for the challenge.

“In that new role, I will support school administrators at all levels. My role will be to support them in their day-to-day. Certainly concerns that come up, I’ll work with them on that, but also work with what their buildings are doing, as far as professional learning and goals,” said Roberts. “And I will help to facilitate a high school study that our school district is undergoing right now. We’re looking at the high school experience, which we’ve really never done [before]. How can we meet the needs of students in 2022 and forward?”

Despite looking forward to the job, Roberts said he will miss being a principal all the time.

“I won’t have day-to-day contact with kids,” Roberts said. “It’ll be the first time in 27 years that I won’t be in a high school, and I won’t get to work and talk with kids. I’ll still see [students] because I’ll still be in schools, but it’s different when you’re somebody that nobody knows.”

Freshman Mia LeFevre said she was shocked and sad to learn that Roberts will be leaving. She said there are few principals that can match his energy at assemblies, games, and other events, and that’s what she’ll miss most about him.

“He has a great energy at assemblies,” LeFevre said. “He keeps the students intrigued, but it’s not like ‘You better pay attention to me.’ He still keeps it light-hearted, but it’s not distracting.”

“He has a willingness to participate,” Lesando said. “He’s willing to make a fool out of himself for the sake of the kids, to get a laugh out of them. And I love that about him. There’s not a lot of principals that will do that, that won’t take themselves too seriously.”

Like the students, Roberts said he will miss the teachers. He said that working alongside the teaching staff is one of his favorite parts of being a principal, and he will miss that aspect of his job.

“I’m gonna miss working directly with the teaching staff,” Roberts said. “I will have plenty of opportunities to work with parents because that’s a big part of the job, but day-to-day working with teachers, developing teachers, hiring teachers, celebrating with teachers– I’m going to miss that.”

Lesando said she’ll miss working under Roberts. She said that there’s a strong level of trust between him and the teachers, and that’s something she appreciates.

“Mr. Roberts is probably the best principal that I’ve ever worked under, and he’s number four for me. He trusts us as professionals,” Lesando said. “I’ve come from situations where I’ve had to turn in my lesson plans on a monthly basis, and it didn’t feel like there was a lot of trust between me, as a professional, and the person that hired me. Whereas Mr. Roberts was just like, ‘Nope, you’ve got it. You’ve been teaching for years, you go do your thing.’”

Because there are so many amazing “Mr. Robert’s moments,” Lesando said it’s hard to pin-point favorite memories. But when asked about her favorite memory of Roberts, LeFevre had a quick answer.

“I loved the singing competition between Scotty Roberts and Emma-Kate Salin,” LeFevre said. “It was just my favorite. They went all out. It was so good.”

Roberts said that developing a community around BVSW was difficult when first opening the school, so unsurprisingly, many of his favorite BVSW memories are community events, like the Lib Dubs. He said the 2019 Bonfire was also a stand-out.

“I remember when we had our 2019 Bonfire,” Roberts said. “We had that with a trunk-or-treat. There was a really big push by the PTO to build a community [with the elementary and middle schools]. And I really feel like that was a community event. And I thought, ‘We’ve kind of arrived. Yeah, we’re not that new school anymore, we’ve kind of arrived.’”

Roberts said another one of his favorite memories was a unique experience that he’ll never forget.

“I had the privilege of being in-charge of and speaking at my kid’s graduation, and no one in our district had ever done that,” Roberts said. “We’d never had a principal who had their kids graduate from their high school. And so I got to do that twice. I’ll never forget that.”

Roberts said one thing he’ll always keep with him, into his new job and after, is one of the earliest issues of the BVSW Newspaper, then called the “Southwest Frontier.” In it, reporters criticized him and many of his early decisions. He said the issue was hard to read, but it will always keep him humble and help him appreciate what BVSW has become.

“I will always keep this because it will keep me humble. In the first issue, they just ripped me– up one side and down the other. But I always thought, ‘You know what, someday we’re going to be an established school, and we won’t be brand new.’ And I don’t want to forget what that was like. It was hard to open the school. And so and to see where we are now, it’s great. And so, I’m always going to keep this newspaper.”

Throughout his decade at BVSW, Roberts has undoubtedly made a positive impact on the community. We’re beyond sad to see him go, but wish him the best of luck with his future endeavors.

“I’m going to miss him,” Lesando said. “This job is hard enough, and it’s made easier with a really good admin team. So whoever comes in will have really big shoes to fill.”

Staff will meet his replacement at a meeting on Thursday April 7. Roberts plans to stay for the remainder of the school year.