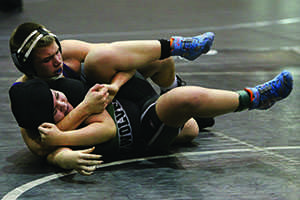 When sophomore Jennifer Jones began her wrestling career freshman year, her friends and peers were “definitely shocked because they didn’t see [her] as the wrestler type.” However, Jones said her friends were still very supportive, and her teammates included and accepted her. Jones is the first female wrestler in the history of the school. She joined the team with no prior experience, except for wrestling with her brothers as a child. Since starting wrestling, Jones has gone on to win one match and hopes to continue to win more throughout her high school wrestling career.

A: “All my brothers did it ­— plus, it was freshman year, and everybody tells you to try out for something, do something you normally wouldn’t do. And so I decided on wrestling because thats stepping out of my comfort zone a little bit, I figured why not.”

Q:What are some of the challenges you face in the sport of wrestling?

A: “The one major challenge is the physical challenge. So, I mean, just being a girl, obviously our bodies are different than guys’, and so it takes a bit more strength training if you want to get up to a guy’s level.”

Q: Was there a person in your life that got you interested in wrestling?

Q: Has wrestling changed the way you view yourself?

A: “Definitely — freshman year, after wrestling, I just had a major confidence boost because freshman year you have a lot of stuff on your mind, and I was kind of transitioning, and I didn’t think too highly of myself, didn’t have a lot of confidence. But after wrestling, it changes the way you look at yourself. And things like, ‘If I did wrestling, then I could make it through this day; I can make it through that.’ It strengthened me as a person, not only physically but mentally. And so I think if people are on the fence about wrestling, just go out and try it. The worst thing that can happen is that you get pinned or you lose a match, but it’s all benefits.”

Q: What would your response be to people who say ‘wrestling is for guys?’

Q: Have you faced any mental challenges being the only female wrestler on the team?

A: “At my first matches I was terrified because I’d go out there and I’d see this big muscular dude. I’m like,’No way in heck can I go out and do this.’ But, I think the biggest mental challenge is just getting out there and being comfortable on the mat, with everybody watching me. Putting myself out there like that — I think that’s been the biggest challenge — but I think I’ve overcome it.”

(1) Fighting her way out of a headlock, Jennifer Jones continues to force the wrestler from Blue Valley Northwest to remove his hands from around her neck. Jones wrestled her opponent for almost two full minutes before she was ultimately pinned at the end of the match. Jones was the only girl at the match on Jan. 21. (2) Struggling to remove herself from the grasp of the BV Northwest wrestler,  Jennifer Jones perseveres through to escape. But at the end of the match, Jones was pinned anyway by the male wrestler from BV Northwest. (3) Charging at her brother senior Dahrah Jones, beads of sweat drip down Jennifer’s forehead. During the “aggressive drill” at wrestling practice, the wrestlers must continue to attack at their partners for three minutes. (4) In the grasp of her brother, Dahrah, Jennifer pushes back during a JV wrestling practice. (5) Wrestling the previous BV Northwest opponent, Jennifer fights to escape her way out of a headlock to gain a point. At the end of the match, Jennifer ended up falling to the other wrestler and was pinned. (6) Escaping from a headlock, Jennifer Jones fights her way to get another point on the scoreboard. The referee at the match watches carefully to see if Jennifer has her shoulders on the ground for two seconds, indicating she has been pinned. 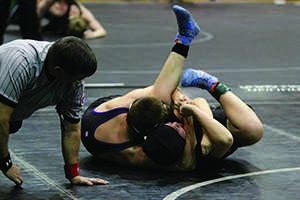 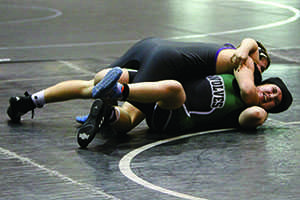 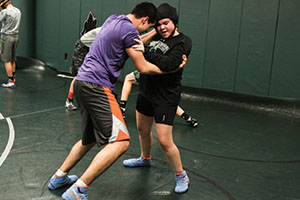 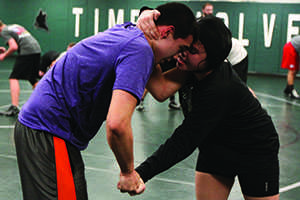 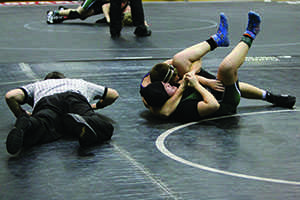